A rebus on Thursday ... so comforting. Today, circles give the trick away a bit, and I'm guessing that's because each rebus is different. Or maybe it's because each one is a different word for what surrounds it. And all eight rebus answers are good - or should I say, there isn't one that DOESNT[RING]TRUE. 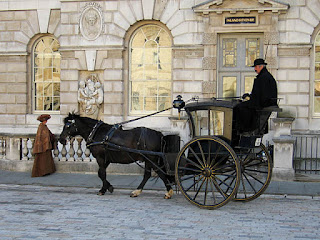 As I look at the grid now, it seems very segmented, with single entry points to the NW and SE, and the middle tightened up by those two diagonals of black squares, but I did not feel restricted by any of that while solving. Maybe having two of the trick squares right at those tight juncture points helped somehow? Oh, I don't know... what am I, a professional critic? I just solves it and I writes about the experience.

And overall, I'd give it a smiley EMOJI today. Little RAW bits like EES, MOS, and the odd-looking HOMIE (Bud) (Is that how that's spelled?), were more than balanced out by amusing clues like "One who has it coming?" (HEIR), "Travel tirelessly?" (SLED) (At first I thought "Sure, while you're going down the hill," but then I realized that they mean "on runners, not tires." Very nice!), "Be routed" (LOSEBIG) (Boy was I ever way off track here!), "Straight up" (NEAT), and "Sound followed by a whistle, in cartoons" (SNORING). That last one took me forever, but maybe because I think of the whistling as a part of the whole that is SNORING. Or maybe I was just still partly asleep myself. :)

In addition to all that, we've got SCRUM, GNOME, BOSSED, MINSK, the lovely quote clue for DESTINY ("____ is not a matter of chance; it is a matter of choice": William Jennings Bryan), and our old pal Phil OCHS.