Cute theme today that takes the idea of a STRONGPASSWORD and transforms it into an ordinary phrase in standard text. So TWOPERCENTMILK is to be imagined as 2%Milk, say, and ONEMICHELINSTAR as 1Michelin*. And speaking of 1Michelin*, we had a lovely dinner at LaButte a few years ago, and I can recommend it if you happen to find yourself out in the wilds of Brittany. 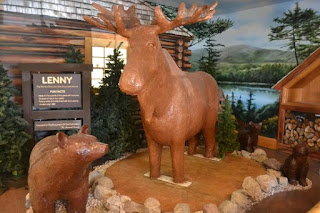 In non-thematic material we have the exciting DAREDEVIL (Adventure seeker) and the interesting SCHLEPPED (Lugged). I learned the latter word while I was working as an assistant for a photographer who worked with film and a 4x5 camera. I think that's all the explaining I need to do on that.

I slowed myself down by dropping in "legoS" instead of ATOMS (Small building blocks) and "dealS" instead of PACTS (Things finished with handshakes), but I already had a cross or two for EPEE (Something waved in the Olympics," so although I was tempted to enter "flag," I held off.

Is it duplication to have both "iphone" and IBANKER in the same puzzle? And really? IBANKER? Is that a thing? And is CONG a common abbreviation for "congress?" I'm sure I don't know.

But those quibbles aside, I appreciate the oddness of this theme. What more can one ask for on a Wednesday?