Hmmmm.... I'm not sure about this one. The word bottle is "spinning" through the circled squares, starting both at the twelve o'clock and the six o'clock position, and where the letters intersect, one is used in the Across answer, and the other in the Down answer. I can see what's going on, but I didn't get a real good understanding of why. Nor did I get a real "aha" moment when I figured it out. If I figured it out ... maybe there's more to it that I'm missing, and if so, please chime in with a comment. And while you're at it, you could explain to me how "MOWS down" means "overwhelms." Is it like how the guy below "mowed down" the competition? I suppose that could work. 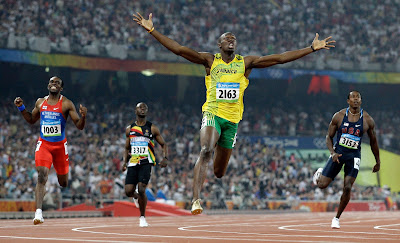 I guess when I see two letters in a square, I expect more of a Schrödinger situation, but still ... I guess it works. I shouldn't wish for more, right?

How demeaning is it to be called a "Common baitfish in North American streams"? I mean, you're already called a CHUB. Sheesh.

And what about that library clue?! ABOUTNESS - "Relevance of text, in librarian's lingo." I've been working in a library for the last dozen or so years, and while the word doesn't seem completely alien to me, it's not one I ever use. But then, I'm not actually a librarian, and I've got nothing to do with cataloging, which is where I assume it's used. Still - shout out to all the librarians out there! :)

"Tangy" isn't exactly how I'd describe ONIONDIP. You?

Boy, it's death by a thousand pin pricks today, isn't it? I'd better just leave it. Suffice to say, I'm not INLOVE with this one, but I do appreciate the novelty. How'd you like it?

Posted by Horace Fawley at 1:30 PM