This one got you in the mood to eat right away with the MCRIB. I remember having one of those on a cross-country road trip in 1981, when McDonald's was still using those Styrofoam clamshell cases for all their food. The eighties were an interesting time for fast food, but a particularly bad decade for the environment. Remember James Watt? Good times. 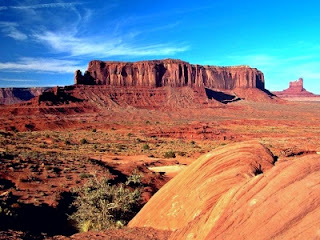 From there, the theme gets a little trickier, in that it turns into a real theme where you have to focus on only the first word of the four longest across entries to find more sandwiches: a WRAP, a delicious CUBAN, a CLUB, and a good old-fashioned SUB. And to wash it all down, have a shot of STOLI. What? 1A and 67A aren't really part of the theme? Now you tell me!

What is part of the theme, apparently, is 58-Down, DELI, which they claim is where you might find the sandwiches in question. I think "might" is the operative word here, because I don't remember ever being in a deli that offered a cuban. And speaking of cubanos, the best one I've had was at a Cuban/French restaurant called Chez Henri. Boy oh boy was that ever good. They went out of business, though, so don't bother trying to find it.

Anywho, the theme is good, especially if you mold it to your own appetite. Throw in a boiled OEUF, for example, and finish with two frosted raspberry POPTARTS, and you've got yourself a date! (Yes, you can leave out the FLAXSEED, but if you wanted to swap out SCOTch for STOLI, I'm fine with that.)

As for the B answers, I liked GETAB (Do better than average, gradewise) better than BTEN (Vitamin also known as PABA). I also liked TUNDRA, ACUTE (who doesn't love geometry?), DIWALI (I learned of this holiday through crosswords), and the goofy clue for BARNONE (Without exception ... as in dry counties?). Not a bad debut, Ms. Kimes. Congratulations!

Posted by Horace Fawley at 7:08 PM