Today's clever, if commercial, theme takes familiar phrases and replaces one word with a brand name, then–obviously–clues the resulting phrase wackily. As is so often the case, explanation will be made easier with an example: "Nature abhors a vacuum" is changed to NATUREABHORSAHOOVER, and is clued with "Reason that the prestigious scientific journal refuses articles from President Herbert's relatives?" See? Nothing at all tortured about that clue, right? 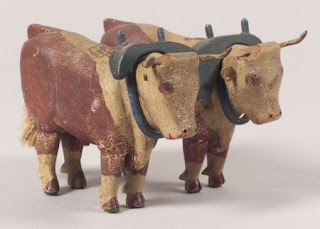 More straightforward, I think, is "Volunteered at a nursery?" for WORKEDFORPLANTERS (Worked for peanuts). As I said at the top, though, it's clever enough, and the idea of THROWINGINTHEBOUNTY (Adding a historic ship as a deal sweetener?) was humorously absurd. And really, what more can one ask?

In the fill, I have a couple questions. One - is MONTE always a "rigged card game?" Isn't it possible to play it in an honest way? I mean, it's still hard to follow the hand movements of a skilled practitioner, isn't it? And two - does the answer to "Cloth woven from flax fibre" have to be IRISHLINEN? Is it thought that the spelling of "fibre" makes it so? Couldn't it still just be plain old linen? I'm sure I don't know.

I liked the highfalutin answers "Ad VALOREM tax" and NUNCIO (Vatican ambassador), the geologic pair of SEISMS (Great shakes) (Nice Non-QMC) and BASALT (Volcanic substance), and the clever QMCs "General practice?" WAR and "Nice nicety" MERCI. That's Nice the town on the Riviera. In France. Clever! And I loved "Two fifths of one quarter" for DIME. Very nice.

And have I ever told you the story of when Frances and I went to a bakery in Denmark and asked them what word they used when talking about the sweet pastries they had for sale? They said "Viennoises." Well, we haven't yet been to Vienna, but we will get there, and when we do, we'll take one more step toward getting to the bottom of this ongoing mystery!

Overall, this puzzle had a good spirit. Fun, clever clues, references from all over, and a kooky theme. Thumbs up!

Posted by Horace Fawley at 9:22 PM