For this puzzle, the note about a slash running from the top left of the circled squares to the bottom right is necessary for the entries to make sense. Otherwise, one might look at the [NNOO] entry in 13-Down "Classic dorm room meal" (RAME[NNOO]DLES) and try to fit it into CART[nnoo]ETWORK in the same way. But with the slash in place, it's possible to alter which pair of double letters is used first, and this allows for the correct version - CART[OONN]ETWORK. Got it? Good. 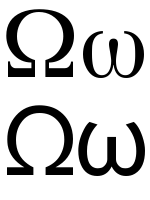 The double-double letters appear in several more entries, some better than others. OVERHEA[DDOO]R is the weakest, but it crosses BL[OODD]RIVE, and it's hard to argue with that. I did not know GLORI[AALL]RED before this, but I feel I should have.

Overall, I guess the theme is ok. It's not my favorite, but maybe only because the online experience was not the same as it would have been in print.

In non-theme, my favorite entry was BAAED (Complained about getting fleeced?). Absurd, but hilarious. And speaking of absurd and hilarious, EUGENIE reminded me of "The Windsors," a parody tv series with some very funny moments.

I was slowed down in the NE by 15D: Deep-toned cousin of an English horn. When I saw that it started with "BASS___" I really tried hard to make "bassoon" work, but no, they wanted BASSOBOE.

SOAP (Dove bar, e.g.) was nicely disguised by the ice-creamy clue, but it reminds me that last year a New Yorker article and a piece on Slate provided evidence that would challenge this clue. Dove itself calls its product a "beauty bar," and not a soap. Out here in the real world, I don't think there are many people who would complain about the clue, but what is a reviewer's job but to point out such little oddities?

Overall it was fine. Frannie takes over tomorrow, and I'll see you again in a few weeks. Happy puzzling.