I'm writing this review late in the evening after watching five stage productions at my daughter's acting camp starting at 12:00 and running until 9:30. They had three weeks to put these shows together, and they were pretty darned impressive. The day ran like clockwork.

A little mini-theme is presented in today's puzzle. I noted the unusual shape of the grid when I opened it up, but did not immediately make the connection to the face of a clock. In fact the entire west half of the puzzle yielded nothing to me. My first entry came at 17D: X'd out completely, in the game Battleships (SUNK). But it was the shape of the puzzle which made 24D and 24A gimmes (ONETHIRTY and OCLOCK respectively). That's too much on a Saturday. 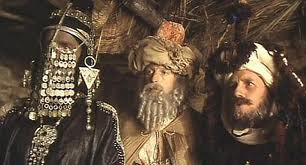 The SE fell pretty quickly, although I had a hard time seeing SENDSON (31A: Forwards). In part, it was the oddity of DOMECAR, which I've never come across before, as well as the initially opaque 33D: What "///" may represent (SPARES). AILERON and STROPHE are two handsome entries, and ICANRELATE is reasonable colloquial fill, although my daughters have shortened it to either saying "same" or "me."

The NE had nothing much to comment on. RAMONA was clued in a near impossible way. I'd never heard of novelist or novel. But it became clear that it was the only choice because the crossings were fair.

On second pass through the western half of the puzzle, I actually found a few entries I should have gotten earlier, like the SHETLANDISLANDS and ALADDIN. I'm going to quibble pretty strongly about ATREAR. This is not a thing anybody says. Nor will they at any time in the near or far future. It's just not a thing.

In the NW which was the last part to fall, I liked ANATOLIANS and SALAMANCA right on top of each other. VETOES was a nice answer to "Sends back to Congress". How many people put "re-" in at the beginning without hesitation? I liked PASSINGINTEREST, did not much like VENAE, and RESP is poor stuff at 1A.

On the whole, I didn't hate it, but it paled in comparison to yesterday's gem.