What is this, a metatheme? I have to confess to being fairly amused when I finally filled in the revealer at 60A: Question answered by this puzzle's circled letters (WHEREISTHETHEME). I had gotten the answer, but couldn't fathom the question until I had most of the crosses. The three phrases containing the phrase "Hidden in plain sight" are good solid entries, my least favorite being INDIANPLANTAIN. The grid is sort of odd because of the pair of 14-letter answers. So, a peculiar beast, befitting a Wednesday. 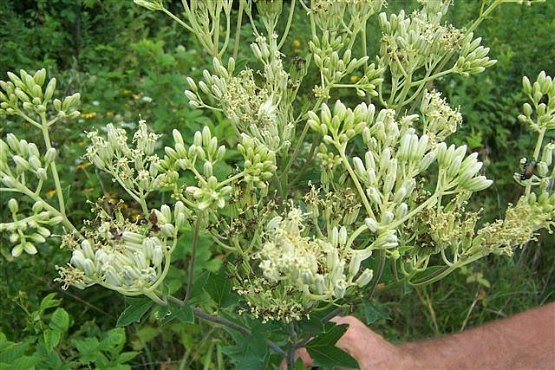 The fill has a number of really fine answers. I'm not a fan of ELIMANNING: I think he's overrated, especially because he beat the Patriots twice in the Super Bowl, but I enjoy seeing a full name in the puzzle. It's also good because it crosses three theme answers. The matching answer on the other side, AMSTELBEER, feels just slightly off, in that I've never called an Amstel that. But again, it crosses three theme answers, so there were constraints.

Other nice answers include WRETCHES, which took a long time for me to see, and NATIVETO (ditto); I had Choker for CRAVAT for a while, which kept me from recognizing those two. I also liked MOLDERS, which is evocative, to say the least.

On the downside, the two rows with four 3-letter answers have most of the worst fill. 21A: Letter after kay (ELL) was not clued well. ING, CVI, DJS all leave something to be desired. The worst offender is 26A: Santa ____ (some winds) (ANAS) - is wrong. They are the Santa Ana winds, already a collective plural. I don't see how you can further pluralize it. And it crosses ENNA. And ANNA is also in the grid. Blah.

Not a lot to report on clever cluing. 7D: What may be up when the police arrive? (JIG) is cute. 36D: Subjects of heightened interest, for short? (CDS) is more clever than cute, especially when you realize that interest rates on CDs currently are around 0.25%. I liked 47D: It's big in Japan (FUJI) much better.

I'll give it a qualified thumbs up.