Oh, this was very smooth. I'm not a huge fan of an obscure Abbott and Costello comedy right near the beginning (RIORITA), but all the crosses were reasonably fair for a Friday.

I was going to complain about DIABOLO being clued this way (60A: Toy consisting of a spool on a string) as well, but then I looked up what to heck the darned thing was, and I see it's certainly a very common object, so I yield. 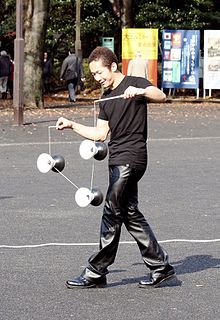 These were my only complaints in the long fill. The remainder I waive essentially in its entirety, as the strengths of the puzzle are lovely.

I broke in with 25D: Prominent part of Nestea's logo (LEAF), and was able to spread quickly downward, once I got 45A: They're just above a handlebar (NOSTRILS). It was here that I saw that this puzzle and I were going to get along. What a ludicrous piece of absurdity. Hah! I love it. 48A: They write many opinions (LAWCLERKS) is precise and a chunky answer in the grid.

The SW is my least favorite part, what with the disguised partial THEAREA and oddly stuck together YINYANG (I suppose you might come across the "joined forces" separated by a hyphen alone, but I usually think of it with an "and" between them). But I really enjoyed SANDWICHBAG and BABYDOLLS, and the former was worth the crosses.

I have never used MITCHUM deodorant. I usually think of the author when I see that name, but it works. I truly love 10D: Take things the wrong way (THIEVE). That's so great, a misguiding clue that needs no question mark to work well.

Finally, how wonderful to have SADKEANU in the grid.

1A: Island known for its coffee (SUMATRA). I expect there are some on this blog who'd shiver with joy at this clue, but it leaves me cold. B-.