All the puzzles at the A.C.P.T. have titles, and those titles always give away a little about the theme. If, that is, you can decipher them properly. The same is true of Sunday NYTX puzzles, and today the title, correctly interpreted, means "some common phrases with O (nothing) and ON added to the end of them." As in, MOVIEBUFFOON (30A: Inspector Clouseau or Borat?) and WAILINGWALLOON (85A: Audibly upset Belgian francophone?). I like that second one, but oh that tortured clue! 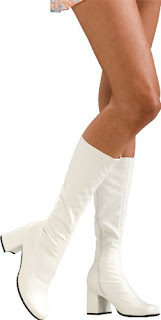 One slight problem for me today was that I was expecting that 22A and 107A would also be theme answers, and maybe a couple more of the Down answers, but really, there were already plenty of them. What are there, nine? And MONSTERSBALLOON (28D: Something seen at Frankenstein's birthday party?) runs through six other theme answers! Impressive.

As usual, though, for that kind of bravado we also contend with a few odd plurals (VACUA, LOCI, ACTA), a few old theater types (BAVIER, ADAIR, RENE), and the usual sprinkling of foreign matter (ACHT, AEREO, OCHO, KENDO, ACLEF (!) (8D: Roman ____ (à clef)). We also get such gems as SPLEENY (33A: Peevish), BASEST (34A: Most contemptible) and ULA (74A: Suffix with blast-). And I was all set to complain about BEREA (62A: Kentucky college), but after looking it up, it's such a great school that instead of being mad about it, instead I'm glad to have learned about it.

The theme entries made me chuckle, but overall it seemed a little meh.