Funny that GOGOBOOTS (58A: Iconic part of Nancy Sinatra's early attire) appears twice in one week. Oh, ok... twice in two weeks. When's the last time you saw them in a puzzle before that? Not that I'm complaining, really, but Nancy Sinatra? THEFONZ? Zhou ENLAI? Even IMBAD is now 30 years old. 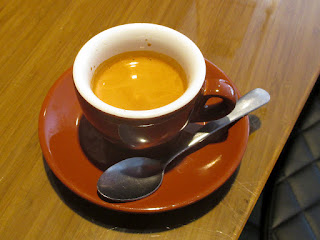 But then there's that SE corner. I like OPTIMIST (38D: Bull, essentially), HOTDATES (39D: Highly anticipated social events), and SPYSTORY (40D: Work with intelligence?), even if it does end up requiring ALITO. We also get HELLOKITTY (47A: Toon who wears a red hair bow) (tried Minnie Mouse first - does that say something about my age?).

In other areas, I enjoyed LINTEL (48D: Doorframe part) ("... And hold to the low lintel up/The still-defended challenge cup..."), HURTLE (11D: Rush) (the NE was very difficult for me!), and PLAGUE (46D: Hound). I did not particularly like the repeated "Heavens to Murgatroyd!" clues (GREATSCOTT & OMIGOSH). I don't know quite why exactly... I guess it just seemed sort of unnecessary. Sort of vague. I'm also done with the whole ____ nazi thing. Can't we just get past that kind of SMEARTACTIC?

Finally, I will say that I was happy to see DAN clued with "35A: Savage of 'Savage Love.'" Frannie and I saw him speak at an A.L.A. conference a while ago, and he seemed like just as good a guy as he does when you read "Savage Love," which I used to see in a local rag called the Weekly Dig. (Side note - B.E.Q. had some crossword puzzles in there from time to time. Also, I had a couple crosswords in there!) I think that he would be amused to find himself so close to PEGGED. Too much?