Today's theme really tested my metal. As it happened, my mined wasn't quite up to the feet. At 9D I had SCOUTs___ for a long spice, but I could not come up with OATH, possibly because I never was a Scout. I might have gotten to OATH if I had been able to get 43A. Wring. Coming up with the homonym ring was no problem, but for some reason I couldn't pick up on ring as in phone. I circled around and around other types of rings with no success. Insufficient cranial DEXTERITY after last night's late night on the town. I finally asked Horace what it was so I could finish the puzzle and get going on the revue. Dough!

The theme is clever, unusual as far as my experience goes, and includes some good material. My favorite is MOBILIZED for Mustard (16A). I also liked Lodes for Loads ALOT, GLIMMER for Re/ray, and Flea/flee/ESCAPE.

Among the downs, there was also some nice fill. I liked BISTRE in particular. You don't see that word every day. And ETTU (Classical rebuke). 15D. One for whom work is play? (ACTOR) and 54D. Priest from on high? (LAMA) were cute.

Today' theme reminded me of a story I read when studying language and linguistics in my salad days. It's called "Ladle Rat Rotten Hut" by H. L. Chace. I recommend it. 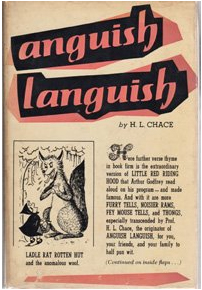 It was a tall order to make all the across answers floe, so it's not surprising that some theme material wasn't so grate, or did it? I thought the synonymity of sum answers was a little off including Cents/sense/IDEA, Bate/bait/TRAP, Hoes/hose/TUBE, and Chute/shoot/DART. And, perhaps because I do like RYES, I found the clue Lickers a bit off putting. :)

I was also troubled by DRYROTS at 23D. I'm not sure if that's meant to be a plural noun or a verb. That tree dry rots every year. We must find a way to stop the dry rots.