Oh no! A dreaded three-sided triple stack! All those 15-letter answers piled on top of each other, meaning that the fill will have to be tortured to account for it, right?

Well, actually not so much today. The first 15-letter answer I got was 10D: Masterpiece designated "quasi una fantasia" (MOONLIGHTSONATA), which was a gimme for me anyway. I'm not sure about leaving off the word "the" from the start of the title, but I was particularly happy when I immediately got 11D: Per a 1942 song, "She's making history, working for victory" (ROSIETHERIVETER). Those two together made filling out the whole east side of the grid a snap. 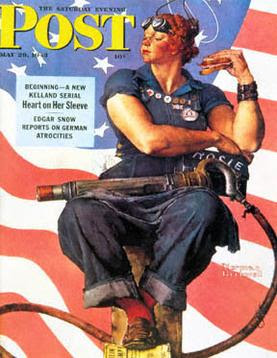 The middle broken-up section was none too hard either. I like 27A: Gathering of stockholders? (HERDERS), and 7D: "Such gall!" (THENERVE) is a nice entry. I knew Vince VAUGHN's role in The Internship, although I never saw it. I like the reference to Celsius (SWEDE). There are a whole bunch of 3-letter answers in this section, but the cluing is fun, such as 40D: What might be grabbed in a rush (ORE), and 24D: Thick plank insert? (ASA), so I didn't mind them as much.

The lower triple-stack took longer to figure out, even with the ending letters in place from my good luck in the east. I'm not fond of VENGE, which feels not quite well enough clued. Couldn't a Shakespeare quotation have been used? I've also heard other bloggers complain about 15-letter answers that use "one's" as in RESTONONESOARS, but it doesn't bother me too much. The clue for ATTENTIONGETTER is nice (Big wave, e.g.), but it was given away by the cross-reference to 8D: Common 60-Across (HEY). And WASHINGTONSTATE feels a bit superfluous. Surely Washington by itself is sufficient?

That leads us to the west set of triples. All three are very nice, particularly CASUALTIESOFWAR. The only unfortunate cross on that side is TCCHEN. I'd never heard of him, but I'm no golf aficionado. EIEIO is a clever way out of a difficult set of letters.

Errors I had: "touareg" instead of ARABIAN, which seemed to work because of gSTAR. And the one error I finished with was oNICE instead of INICE. I certainly don't think of Champagne arriving "in ice." It makes no sense. But PINTO was obviously the choice instead of PoNTO.

So I'll give this puzzle a thumbs up over all.