Today we get four (somewhat) different definitions of "Queen/Queens". Somewhat, I say, because in all four cases, the word derives from the feminine royal title. I don't really count that against the theme though. I do like that there are two "Queen's" and two "Queens'". It is also odd that there are five answers and four clues, but that's okay.

All four answers are standalone strong. RUPAULSDRAGRACE must have been the seed for this. I have never personally watched the show, but it's been going for 8 seasons, so it's clearly successful.

There's nothing terrible or really amazing about the rest of the grid, in my opinion. I liked BRUNOMARS, but ARROWHEAD is kind of meh. YALU is a bit of Chinese geography trivia: it's nearly 500 miles long, so somewhat longer than the Susquehanna but not as long as the Wabash. I don't know if that makes it crossword-worthy or not. The clue was semi-interesting. 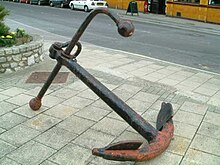 My error came at LOCI, where I put fOCI (29D: Central points). I'd say my answer is more correct, but there's no singer nicknamed JfO, so there you go. 1A: Bear whose bed was too hard for Goldilocks (PAPA) gets a B for the effort. It's certainly better than referencing the Smurfs.