What a weekend! Mssrs. Berry and Chen, back-to-back! I smiled when I saw the grid shape, because just yesterday, Mr. Chen wrote of Patrick Berry's grid:

"A constructor's secret: those "stairstep" chunks of black squares in the north, west, east, and south can make filling a low-word-count grid like this almost an order of magnitude easier. Not only do those blocks chip away at the number of letters you need to put in, but they tend to stagger entries, making for more favorable vowel/consonant patterns.
It's a tricky balance, though — use too many of these stairstep chunks, and your grid looks visually unappealing. (Also, overanalytical/anal constructors notice your overusage and annoyingly point them out.)" - (xwordinfo.com, April 7, 2017)

Interesting, really, that both puzzles are 62-words, and both use a very similar black square pattern, but I'm going to have to give Mr. Chen the edge here, as his puzzle is far more peppy. The grid is brimming with lively seven- and eight-letter fill. I loved the clueing for BITPART (23D: It's just a line or two), TIMELESS (29D: Suitable for all ages?), CASHBOX (45A: Tender spot?), ONEHORSE (28D: Jerkwater), and WOOLCAP (9D: Head scratcher?) ("wool hat" might have been slightly better, but that's pretty picky). Then there's stuff like NUFFSAID (31D: "I'll shut up now"), 1D: "Hello ... I'm right here" (AHEM), and CANTFAIL (27D: Guaranteed-to-fly), which I also like. I've never heard the term DEADHEAD for an "ineffective pill," and I've also never heard of XKCD (47D: Award-winning webcomic about "romance, sarcasm, math and language"), or ABRA (46D: "East of Eden" girlfriend), so that wasn't so easy. 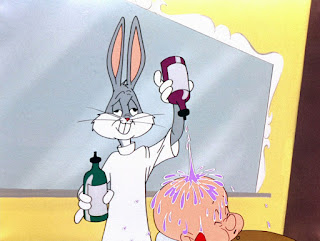 1A: Subject of plays by Sophocles, Euripides and Cocteau (ANTIGONE) - A. I'm a sucker for the Classics.
Favorite: 3D: Wear (out) TUCKER
Least favorite: DONEE (14A: Philanthropy beneficiary)

So overall, this was a fun Saturday for me. There's more to mention, but I'll leave it for you to discover.