Today's theme is cleverly turns states of the union into a union of states. Each theme entry consists of three overlapping state names, creating TRISTATEAREAS. It's cool that the constructors figured out this could be done. The clues for these answers consist of a list of various state things. I think the first group is birds, the second is flowers, and the third is maybe nicknames? As you see, dear Readers, my knowledge of state trivia leaves ROOMBAS for improvement.
The northwest region contained most of the C/APs I liked the best. I enjoyed "Rider of the lost ark?" (NOAH) - ha! - "Place to pick some vegetables?" (SALADBAR), and "Tear a lot" (WEEP), not to mention SIZE up, which is a nice expression. I'd like to give a shout out to the southeast, though, too, for "Oscar and Edgar" (AWARDS). 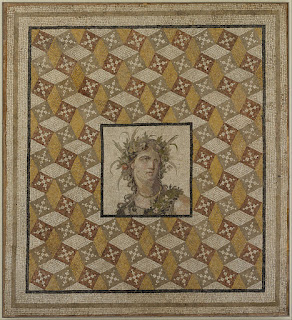 Despite the theme's focus on USAUSA, there was some fun international fill as well. I am learning Greek right now so I especially enjoyed the pair of Greek letters, ZETA and ALPHA, and the two Greek myth elements, LOOM ("Device for Arachne, in Greek myth") and EREBUS. We also got two German entries (NIE, EIN) and a "Ne plus ultra" in the clues. Ole!
ICAL ("Suffix with period") was, perhaps, borderline, but otherwise I thought the fill was capital.
~Frannie.
Posted by Frances Page at 6:04 PM