HEARD AT THE MOVIES

The fill was pretty tight, and it "kept us working," as Frannie puts it. Interesting to learn that Halle Berry was once runner-up in the MISSUSA pageant. That was in 1986, incidentally, and that same year she finished sixth in Miss World. Who knew? I'm sure Huygens (and everyone else) will enjoy mention of the OORT (27A: ____ cloud (source of comets)), and in related material, MOON (29A: Spend time in idle reverie) is given a tricky clue. And speaking of tricky, I also enjoyed 26A: Ring material (CANVAS) and 86A: Load bearer (HAMPER). You don't hear that word much anymore. At least I don't. We always had one when I was growing up, but now we just have a basket, and we don't call it a hamper. Also, I did not expect WUSSY for 72A: Like a milquetoast. I think I tried "timid" until COLDWAR (50D: It was satirized in "Dr. Strangelove") changed the first letter. Then I think it was Frannie who finally filled it in. 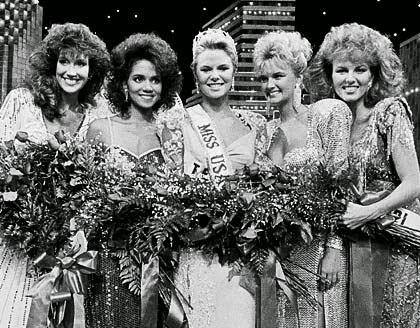 Was it just yesterday that I railed against clues like 38A: Parisian possessive (SES)? Well, at least today's is more realistic.

There were no real groaners, and plenty of unusual, interesting, or funny things, and how can you not smile at a puzzle that includes 93A: "That's what she ____" (SAID)?