Well, this was a toughie! Even though we have learned that "-" clues mean that the answer will be a continuation of a previous entry, it still took us until almost the very end–when we had all but the beginnings of those words on the left side–before we finally broke through. And then it was over in a flash.

One thing that held us up for a good long while was my guess of "Mr. Ed" for 19A: Lovable 650-pound TV character (GENT/LEBEN). It felt wrong from the moment I put it in, really, because we wanted DOLEOUT for 3D: Apportion, but I didn't see what else it could be until we finally got SHOPA/HOLIC (12A: One who gets a charge out of charging?), which Frannie had wanted from the moment she read the clue, and then everything started to fall into place. 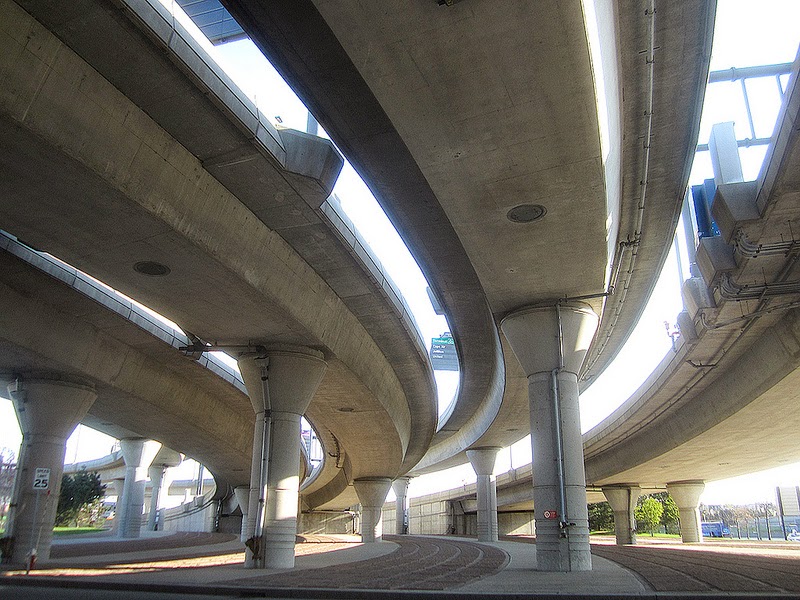 Anywhoo, I guess it's a cute theme, even if it does trouble me a little that, in the first place, I think of the structure more as an "overpass" than an "underpass"–the "underpass" part is pretty much just a result of building the "overpass,"–and in the second place, there is nothing "under" there at all. We are to just accept that the words have a giant gap in them. I guess it would be very hard/impossible/totally unfair to create a grid where letters were simply assumed, but still, it troubles me.

The concessions to the theme were heavy in places - HUS (Czech reformer Jan), ABT (13D: N.Y.C.-based dance group) (?), HEL (15D: Daughter of Loki), and NOMAN (29D: Another name for Odysseus) (tough!), for example, but I guess that's to be expected, though not relished, in a puzzle this complex. And there were some good parts, too. I enjoyed the very easy TOOSOON (41D: "We're not joking about that yet"), and I like ANOMALY (33A: Outlier) and this use of REPAIR (6D: Withdraw (to)).

I guess in the end this is one of those puzzles that I enjoy not because it sparkles with WIT (57A: Wordplay, e.g.) (although ASL (61A: One way to see a talk, for short?) is very good), but because it presents a strong challenge. Thumbs up.