According to the Wikipedia, they're one week late for the anniversary of the original release date of August 12, 1939. But hey, it's probably close enough for a 75th anniversary, right? And really, this is a heck of a tribute puzzle. Look at all that theme material! Four fifteens, a centrally-located DOROTHY/HEROINE pair, and a couple of circled letters. That's a lot! 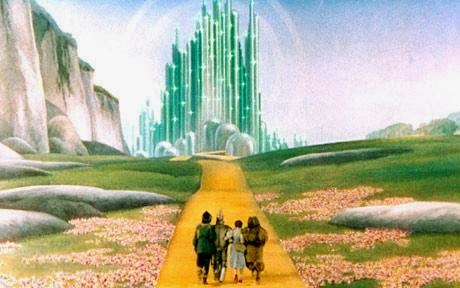 The theme material is great, but as you might expect with some 40% of the letters being theme-related, there are going to be some compromises elsewhere. And yes, there are. Here's a little list of crosswordese and odd fill - EIRE, ALI, CGI, ARA, POL, ROAN, SSNS, OREO, LAS, ASL, THA, ATOI, ROO, OTOE, DATS, AER, EDYS, REM, BYS, ALKA, WEI, ODS, AVER… and I'm not even counting names like BIALIK, ZAC, AKIVA and ENZI.

That's a lot, but I think the theme still wins out. I mean, come on, who's going to challenge the Wizard of Oz? And somehow there's still room for some nice non-theme stuff, like QUASH (22A: Put down, as an uprising) (are we thinking of Ferguson here?), STACKS (47D: Library area) (Frannie would love this if she had done this puzzle), HECKLE (48D: Jeer) (great word), NAKEDEYE (64A: Unaided vision, with "the"), and KLUTZY (65A: Ham-handed).

On balance (and my those scales are full), I give this one the thumbs up. For theme, and because Mr. Buchbinder didn't try to cram in a J for the pangram.