We solved this puzzle the way I like best - with Frannie and me reading the clues together and just calling out what we know. It's amazing how differently we approach the clues, and how often one will know an answer immediately when the other has no idea whatsoever. 10D: Player with Legos, for example (ERECTOR) had me totally stumped, but Frannie knew it right away (hold your comments, Huygens!). She also got PRINCES (47A: They often succeed) (lovely clue!) off just a cross or two.

Because of the two-headed approach, it seemed to play a little easier than some Fridays do, but it's hard to say for sure whether or not it really was. I can say, however, that I enjoyed it. I liked the little "B" theme in the center, with 31A: B, for one (CAPITALLETTER), 34A: Bb, for one (MUSICALNOTE), and 35A: Bb6, for one (CHESSMOVE). And the four fifteens (again with the horizontal symmetry!) were all good, if not terribly exciting. The best by far was GENERALHOSPITAL (52A: Soap of a medical nature). 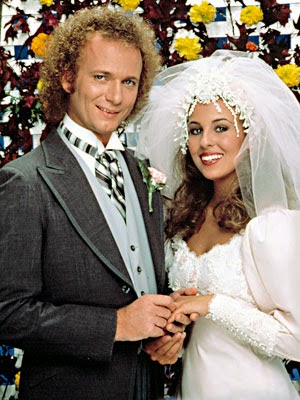 I thought we were going to have another DNF for a minute, because the cross of TISHA (28D: ____ b'Av (annual Jewish fast day) (yikes!) and DECADE (36A: Score at the half?) until that clue finally made sense to me - score = 20. Beautiful.

Sooo... some very nice bits, some workaday stuff. Let's say it was decent, but not great.

Posted by Horace Fawley at 2:28 PM