I'm torn about this theme. On the one hand, I dislike it because I don't really like song titles like these, but on the other hand, what do I care, they're just songs and this is just a puzzle and why do I have to get so uptight about it? (See… I'm practicing this mentality this morning. I figure I'll need it during the next couple years, given the election results today.) So, let's just say the theme is great, and everybody loves the Crash Test Dummies, right? See… there I go again, harshing on everyone's buzz. On the bright side, I do love the song IKOIKO (37A: 1965 hit for the Dixie Cups), but I guess I always assumed that that was not a nonsense title, but just another language. I might be wrong about that, but I'm not going to look it up. I'm going to live deluded, just like a republican does (I can only assume/hope).

In other news, I had "PReMO" for a while. Is that entirely wrong? The other way just looks like "pry-mo," to me, but then, my opinion is often not supported by the majority, it would appear.

In closing, let me try to ALLEVIATE (14A: Take the edge off) matters by posting a photo of somebody that I voted for who actually did win - Maura Healy. Over and out. 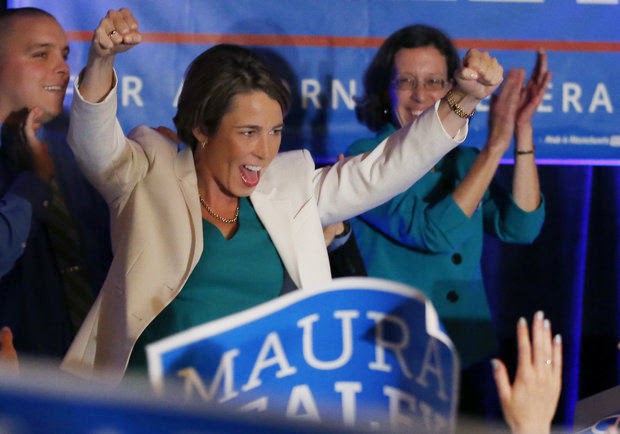 Posted by Horace Fawley at 8:11 AM