Sometimes we have wondered what a puzzle would look like, and be like to solve, if it contained no THREELETTERWORDs, and now we know. It was a bit of a slow start today, and toward the middle I was thinking that maybe I was starting to miss the three-letter words, but the grid grew on me, and by the end I was a fan.

I always like seeing AENEAS (12D: Principal lieutenant of Hector in the "Iliad") in there, and we're both big fans of James ENSOR (44D: "Masks Confronting Death" painter, 1888). At first, it was simply because we had been introduced to him by the They Might Be Giants song "Meet James Ensor," but since then we've seen some of his works in various museums, and he seemed to have had a sense of humor, as well as being a decent painter. 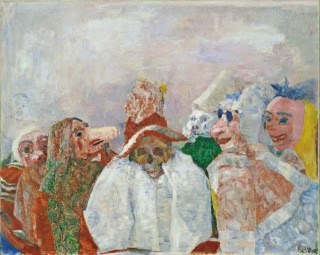 I loved EVENODDS (33D: They're 50-50), ORDAIN (40D: Transition to fatherhood) was clever, and MUESLI (39D: Food whose name means "little purée) was interesting. ANSONIA (51A: Historic residential hotel in Manhattan) and AROO (41A: "King ____" of old comics) were unknowns. The former has quite an interesting history. It's on Broadway, on the Upper West Side, and when it opened in 1904 it was the largest residential hotel in New York City. It was the first to have air-conditioning, and for the first few years of its existence (before the health department shut it down) there was an animal farm housed on the roof, including chickens, ducks, goats, and cows (transported via a "cow elevator"). Every day a bellhop delivered fresh eggs to all the tenants. Now that's my kind of place! The latter, well, it's said it was an intelligent strip that abounded in sophisticated puns and wordplay, which is probably why it only lasted a short time. It last appeared nearly fifty years ago.

I'm rambling, so I'll close now. It was an interesting Saturday puzzle, and a decent enough challenge.