One of the great things about doing crossword puzzles, especially really tough ones like today's, is that moment when you figure out one answer and a domino effect happens. This occurred for me with 44D: 2013 Oscar-nominated frontwoman for rock's Yeah Yeah Yeahs (KARENO). I had K_R_N_; I didn't know her name off the top of my head, but some inkling seeped through, and then I put it in. I had 43D: How Viola dresses in "Twelfth Night" (ASAMAN), although I'd wanted "in drag" first. I also had 45D: Commercial command (ACTNOW), after I'd tried buyNOW.

But getting that O allowed me to see 65A: Wet blanket? (SNOW) - nice clue, especially paired with the other "wet blanket" clue, and then EONS, and then the excellent 54A: Foam figures? (LATTEART) became apparent, and then suddenly 7D: Statement of political hubris (APRESMOILEDELUGE) shone through the clouds of my befuddled mind like a shaft of gold when all around is dark. (It was one of Shaw's... anybody know that reference?) And all the rest of the puzzle was filled in. Not correctly, as it turns out, but we'll get to that.

I was struck by how much the structure of the grid resembled yesterday's. There are four 12-letter answers in an offset stack in the middle, with one long answer crossing the middle. But what's different is that the grid is 15x16, and Louis XV's apocryphal statement is the obvious reason why. For a long time, I had _____MOILED____ for that long answer, and really was stuck. Was there something about "turmoil"? Was it talking about an "oiled" machine? Getting all of the long acrosses didn't help! 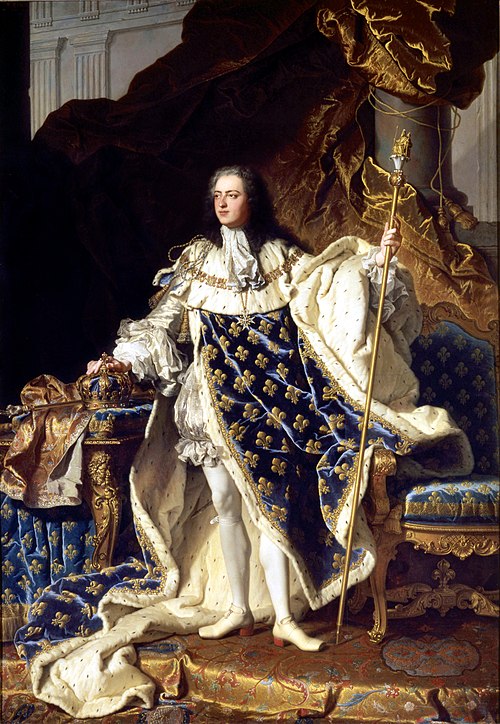 Speaking of which, that stack is outstanding. 33A: Uncharacteristic quiet spell (RADIOSILENCE) is lovely, and well clued. 37A: Get engaged, in slang (PUTARINGONIT) is great, and got a chuckle from me. 38A: Shooter's bagful (CAMERALENSES) had me thinking about BB shots, as well as marbles, before the crosses made the photography reference became clear. And 39A: Female snakes (VILAINESSES) was a complete surprise. I was sure it was a true zoological term.

There are a whole ton of tricky clues today. 1A: Related thing (TALE) was one of the last entries I made. Such an elegant turnaround from an adjective to a past participle. I'll give it a B+. Meanwhile, 1D: Group with many hits (THEMOB) took me until I'd gotten the error message to understand. In fact, I'd entered rANDs (?) at 27A: Travel mag advertiser (BANDB). I was thinking of Rand McNally, I suppose, and I'd never heard of BOBATEA, although I'm sure some here have. So, yeah.

I'll just highlight a couple: 18A: Passing scores? (DIRGES) is wonderful. I love 37D: Like 1[cent], as costs go (PALTRIEST). How about 57A: Old-school rapper? (FERULE), as in the item used to rap children's knuckles. That is crazy tough. Very little waste here. Two thumbs way up.