Well, Dear Reader, it's Wednesday, and we are given an odd duck of a puzzle. The fill is divided into three completely separate areas - the top and bottom are connected to the middle via circles highlighting four things that can be imagined as THETIESTHATBIND the whole thing together; "Rope," "lace," "cord," and "wire." The top grid-spanner, MAKECONNECTIONS, is telling us what we need to do. Hmm... I'm not completely convinced. Especially as the strange construction seems to have forced a lot of less-than-desirable material in the center. PULLA, WIS, RADII, YOS, and ALTAI. Not great. On the upside, I did like the OWL clue - "32D: Fly by night sort?" 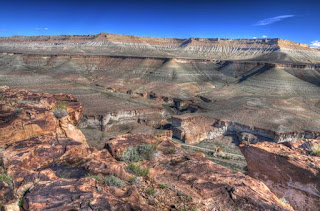 Has anyone else ever heard the expression "A miss is as good as a MILE?" I never have, and I don't like it one bit. The two sides aren't equal! It's been around a good long while, though, it appears, and I like the earlier "An ynche in a misse is as good as an ell." (An ell being an old measurement of about 45 inches.) There, at least, you're comparing two measures, not a verb and a noun. Sheesh!

Furthermore, who the hell is this LENE Russo (16A: Actress Russo)? The first two hits when I Google "Lene Russo actress" (not in quotes) are Lene Lovich and Giuni Russo. Neither of whom seems to go by the alternate name LENE Russo. Just for kicks, I Googled "russo lene actress" and got Rene Russo. So I'm not really sure what's going on there. Hmm... I may be crazy, but it seems that this may indeed have been an error, because now the 10D clue, which I swore was "Plumbers tool" (or something very similar) this morning, is now "Town officials of old" which would maybe work with "prior," but that's still got problems. Well, I don't know what to tell you.

** After reading Diary of a Crossword Fiend, I am reminded that the original clue for LENE was "Voiceless consonant, like 'b' [actually voiced] or 'p.'" This seems to prove that there has been an effort to change this puzzle after distribution. Also, I remember wanting "plosive" to fit in those four squares. I've taken linguistics, and I've never, ever, heard the word LENE before. Not that I'm a good example. I'm just saying.

Anyway, this gets a YECH (and even that's not spelled the way I think it should be!) from me.