Reporting live from Stamford, it's your friends Frances, Colum, and Horace, where after the results of puzzle four, Colum stands in FOURTH place in the C division! Frannie and I... well, let's just not talk about where we are... let's just say we're somewhere in the pack. 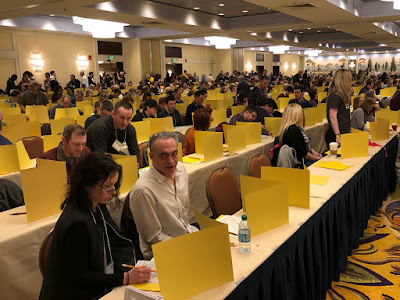 In the category of less than surprising news, it turns out that if you go by an alias in your NYT xword blogging, it's a safe bet that people won't know who you are by your name tag. So Colum, who does not have an alias, has been recognized by multiple folks, including Puzzle Master Supreme Will Shortz. It was a moment of unexpected pleasure that he told Colum that this very blog is one of his favorites. Mr. Shortz then went on to recommend this very blog, the one that you are currently reading, to another person, citing the URL.

I find Horace's one-word description of the comments made by Mr. Shortz about this blog to be apt. Apt!

I am having a great time, as usual, here at the ACPT, but I, for one, am glad to be pseudonymous right now because Frannie's alter ego is tanking. And who wants to read the musings on crossword puzzles by a derelict puzzler? A momentary triumph, after speeding through puzzle four (despite being warned against it), turned to gloom when esteemed commentator, Mike Berman, exited the puzzle room and explained the full import of the warning. On the upside, the explanation increased my appreciation of the cleverness of the puzzle.

Yes, (Horace again), that puzzle was good. But I, too, tanked on puzzle four, and I feel bad about it. But what would the ACPT be if it didn't challenge us?! On the (sort of) upside, I think I did better on puzzle five than I have in any previous year, which is good, but I feel that this was the most accessible "Puzzle Five" for me, and I really think (yes, yes ... I'm not saying anything that 500 other ACPT participants couldn't also say...) that with ten more minutes, I could have actually finished it this year. Ah well... we'll get 'em next year! OK, over to the star this weekend (Damned non-pseudonymed blogger....) - Colum!

Temporary star. I'm sure that when the results for puzzle 5 come in, I will be far down the lists. It was a devastated ruinscape of a grid, multiple craters of white space. But I will rise above it. All the other puzzles have been much better for me. I have to say it's been a real delight meeting so many people whose names I've only seen at the top of puzzles. You all are devious, twisted, brilliant individuals, and I am proud to have the opportunity to comment on your creations. It's been a blast! 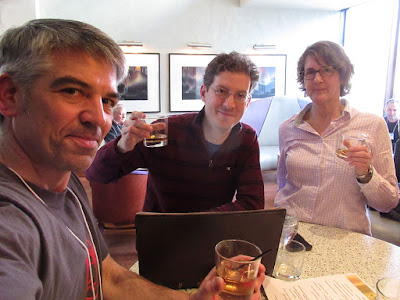