I was happy to see Ms. Carroll's byline today, and I was happy when I finished her puzzle! From start to finish there was plenty to enjoy. I'll start with one that many might consider obscure, and which, with all those lovely "word-ending" letters, might have been an almost accidental entry - RENNES (City in NW France)! Frannie and I have both spent a lot of time in Brittany's capital city, and it was a real treat to find it in the grid today. 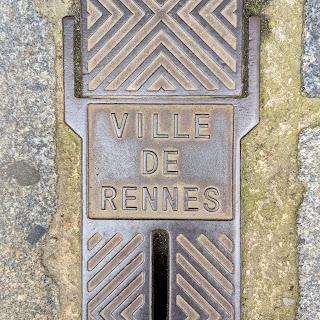 I'm guessing that more universally enjoyed entries might include DEMOLITIONDERBY (Smashing good time) (Nice clue), ROMULAN (Part of a militaristic "Star Trek" race) (Everybody likes Star Trek, right?), OPENBAR (Where to find free spirits) (Everybody definitely likes an OPENBAR!), and the new-to-me-but-still-hilarious SITUATIONSHIP (Romantic gray area). I was working from left to right, and I could fill in the first part with confidence, but I didn't know what the end would be, so for a while I had SITUATIONiffy. Heh.

STYMIES (Foils) and BARRICADE (Block off) are good words, USBPORT (Mouse hole?) and MASTS (Supports for a naval expedition) got cute clues, and STATION (Social position) reminds me that we just saw a performance of H.M.S. Pinafore last weekend. ("Yes, yes, the lass is much above his station!")... FASHIONISTA is fun, and I like how ONETOGO is - in a sort of visual way - the second-to-last Across answer in the grid. It's not according to the numbers, of course, but just look at it!

Anyway, I very much enjoyed this one. I hope you did too.