This was a nice open Friday grid than ran pretty quickly for me. For 1-Across "Schooner feature," I figured MAST was too easy for a Friday, and since I didn't immediately know any of the Downs in that quadrant, it was quite a while before it did go in. I should have known ARALSEA (Victim of a 20th-century environmental tragedy), because there was one week about a year ago where I included a photo of its shrinkage at least two or three days in a row with my reviews. SCRAPPY (Small but full of fight) is a great entry, and although I had an early hunch that "bars" in "Some bars returned to again and again?" was musical, I was thinking "earworm," not THEMES. 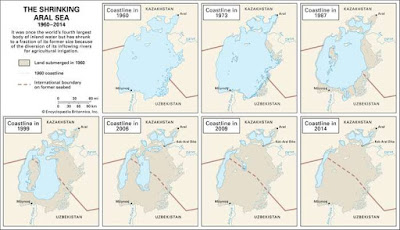 I often think it would be nice if I could be slightly more ASCETIC. Although "slightly ascetic" is probably an oxymoron. I guess what I really want is slightly more self-control. But let's not dwell on that.

No self-control needed when faced with ONEEGG, a plate of UNAGIROLL, or a multi-course ITALIANMEAL - eat it all. :) I'll pass on the PEPSICOLA, though. Even back when I was a soda-drinker, I would rather have had Coke, Root Beer, 7-Up, Dr. Pepper, or even orange soda before I'd open a Pepsi.

I don't recognize WORSETOCOME (Prognosis that a problem has only just begun) as anything I've ever heard anyone SAY. And SUABLE (Fit to be tried) is a bit loose. BEARDCOMBS is gross.

On a happier note, the NE corner had two G&S reminders - POOHBAH, obviously, from The Mikado, and BERTHS makes one think of H.M.S. Pinafore ("True, I lack birth." "You've a berth on board this very ship!"). :)

One more puzzle in The Turn - and as Huygens says, Tomorrow better be tight! :)

p.s. I am sorry to say that I missed two very nice features of this puzzle - a mini theme in the central answers "the MAN, the MYTH, the LEGEND," and I didn't fully grasp the beauty of "Peer of Ibsen" (GYNT). Ibsen wrote "Peer GYNT." Very nice, Mr. Ezersky.

Posted by Horace Fawley at 7:55 AM