Hi everyone! Glad to be back with you for another scintillating (I hope) week of reviews. As always, my respect to Horace and Frannie for two weeks of fun and interesting posts.

But I win, and the reason why is I get to review a puzzle with Rob BRYDON in it, the first time that's ever happened. If you don't know who he is (and the picture below doesn't jog your memory), may I suggest that you watch the series of movies he made with Steve Coogan, all titled "The Trip." They are essentially entirely improvised, and genuinely hilarious, in my opinion. 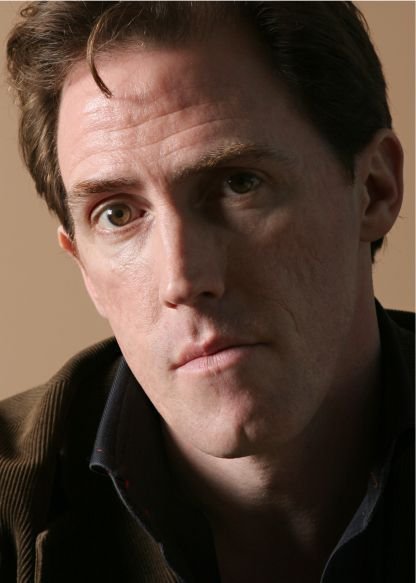 Oh, the rest of the puzzle?

Just kidding! I actually really enjoyed today's theme, related to chess, as revealed at 47D. You can either end a game in CHECKMATE, or when you realize that you're doomed, you can resign by knocking your king over. Thus, we find six examples where the name of a well known king has been knocked sideways out of long down answers. For example, 22D: Spent some time on YouTube, say (WATCHE[DAVID]EO) has the biblical King David sideways at 55A.

Typically, I know that we're supposed to expect that the names will cross over from one word to another in the originating phrase (as in the example above, as well as in TI[MIDAS]AMOUSE, YU[KONG]OLD, and FIDD[LEAR]OUND). The other two examples don't do this, but I don't mind. I very much like NAR[COLE]PTIC, which is a diagnosis in my field of medicine. DESMOND[TUT]U is probably the weakest of the answers in this way, but it's his full name, and we only usually see his last name in the puzzle. It's also nice that each time, the king has fallen down to the left.

My hardest point in the puzzle was at the crossing of 52D: Mowry who starred alongside her twin Tia in the '90s sitcom "Sister, Sister" (TAMERA) and 64A: Pickup line? (RAM). I put the M in because it made the most sense, but only figured out the joke about a line of pickup trucks after the fact.

Some weirdness with GARYIN (I have often heard of the city by Gary, Indiana, but never this way) and the sort of ad hoc answer at 1D: Some hip-hop collectibles (RAPCDS), but otherwise I don't have any complaints. On the positive side, there's OCTOMOM, WENTBYEBYE, and HOTCOCOA, which would go over well in the very cold and wet Northeast of the USA.