I noted the "circle" squares in the grid as soon as I loaded the puzzle today, but didn't think about the theme until after completing it. It took me a minute to understand how the four theme answers hinted at/related to the revealer, SPLITSECOND. The first thing that came to mind on seeing the circled letters VEN US in NOWWEREEVEN and USE was the goddess - possibly due to my recent decision to start learning Greek (I know Venus is the Roman name, but still). After looking at the second theme answer AD AMS, was that it was famous women - Venus Williams and Amy Adams, but when I got to the third theme answer, TUES DAY, I finally caught on: each word in the circle squares is the second item in a known sequence that has been split. Venus was the planet, not the goddess, AD AMS was the U.S. President, not the star of Enchanted, and so on. Maybe if I had started at the bottom with BE TA, my study of Greek would have helped rather than hindered. Derp.
Anyhoo, C/AP-wise, I liked "Grimm sister" (GRETEL), "Headgear for Laurel or Hardy" (BOWLERHAT), "Exhibiting poor taste" (TACKY), and "Destination on a fast-food lover's bucket list?" (KFC) - funny, even though I don't take a KFC myself.
Word of the week - so far, anyway - is GOBI. And, a completely new word this solver was ALETTE ("Small building wing"). Who knew? 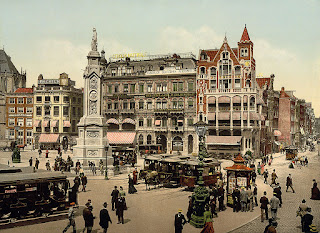 We spent this past weekend with friends, one of whom is a librarian in a town that may renovate a building attached to the library to make a gym for town employees. We amused ourselves by coming up with book titles specifically for the gym crowd. One suggestion was, "Moby Dick, or the great white SWOLE" - which is what reminded me of the topic - but I see from the Wikipedia that the original title of the book is "Moby Dick, or the Whale." Be that as it may, here are some of the others we came up with:
"Ripped van Winkel"
The "Harry Squatter" series
"The Lats of the Mohicans"
"Metamorphosis"
~Frannie.
Posted by Frances Page at 12:28 PM