Another day, another debut. And another uncommon theme!

Diary of a Crossword Fiend has their saying "Tuesdays gonna tuez," but a while ago I countered with "Wednesdays gonna wooz," and I say it again now. Today we have a quote puzzle with a circle and a rebus. The clue for 57D "Rips [five letters]" explains that you need to put two letters into the circle in order to get T[EA]RS, but in the cross, the circle becomes a Schrödinger square giving either the static "stationary" or the paper "stationery." Very nice.

But all that rebusing and Shrödingering is in service to the quote: "NOMATTERHOWMUCH YOU PUSHTHEENVELOPE ITS STILLSTATION[E/A]RY." Heh. And yes, I know that "push the envelope" is metaphoric, but if you were to actually push one across the table, or into a mailbox, for example, in that moment, while still being stationery, it would not be stationary. See, that's the kind of in-depth thinking we get paid the big money for. 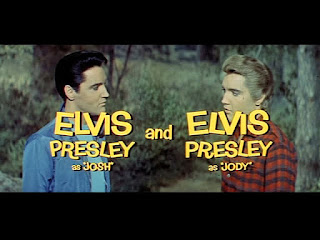 In other news, I had never heard of Elvis's 1964 film "KISSIN Cousins," and when I Googled it and saw the image above, I thought someone had created that image as a joke suggesting that the premise was that he played his own male cousin and fell in love with himself. But I guess only the first part of that is true. Pity.

I enjoyed seeing the oh-so-useful SAWHORSE in the grid, everyone loves Winnie-the-POOH, and REPAST (Meal) is a word that always brings a smile. If I had more time, I'd look into the etymology of that last one for you, but today I've got to light out early.

This one was odd, but not the ODDEST, and despite the philosophical problem mentioned above, I chuckled when I completed the quote, and that's always a good way to start the day.

I hope you enjoyed it, and that your day goes/is going/has gone well.

Posted by Horace Fawley at 6:11 AM