Hmm… to me, string isn't cable, and string isn't yarn, and string isn't rope… but I guess I see what they were trying to do. And, to be fair, string has many definitions, none of which, in the dictionary I have at hand, specifically describes the white cotton object I think of when I hear the word. So, fine, have it your way, Mr. McCoy. 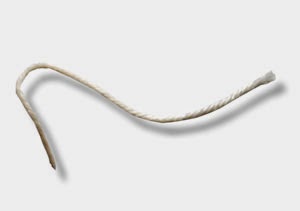 Now that we got that out of the way, let's get right to the word SENESCED (37D: Grew old). It's not a Monday word. Neither, probably, is ASSYRIA (52A: Nineveh's land). Nor ADELIE (2D: Penguin variety). I suppose many will, but I did not know that the 64A: Weasley family owl was named ERROL, nor had I ever heard of HEYARNOLD (30A: Nickelodeon show whose protagonist has a football-shaped head), or TRYHARDS (38D: Those who put a lot of effort into social climbing, in modern lingo) - but those lacunae should not surprise anyone who knows me. I didn't take much interest in Harry Potter, I don't have cable, and I certainly don't try to do much social climbing. There, now you know me, too. Happy?

It's funny, I didn't mind this puzzle while I was doing it - I enjoy the word GAUNTLET (12D: Knight's glove), and RIPSAWS (24A: Cutters that cut with the grain) and DEEPS (29A: Watery abysses) are nice. SPARKLER (25D: Hand-held Fourth of July firework) sparkles, and LOSELOSE (17D: Like a catch-22 situation) is good, and I loved the trivia in SUM (19A: 666, for the numbers on a roulette wheel), but the theme, once I paused to figure it out after solving, actually detracted a bit from the overall enjoyment. As stated above, I have a problem with the very idea, and then the phrases themselves are a bit random. ANYLONGER (44A: For even a second more)? VOCABLESSON (59A: Component of a language class, informally). For some reason, the informality annoys me.

I guess I liked more than I disliked, so it gets a thumbs up, but not way up. How's that?