I enjoyed this Sunday puzzle. The theme of THESTARSPANGLEDBANNER (65A: This puzzle's theme, whose first notes are indicated by circled squares) was interesting - I don't remember hearing that bit about the PRISONEREXCHANGE (99A: Mission that 24-Across was on when he wrote 65-Across) before - and the first six notes positioned as though on a staff was a nice flourish. (As was getting in ORIOLE (94D: Player in orange and black) - another Baltimore reference!) For all that, I'll accept the unknowable (to us) GASOL (63A: Four-time N.B.A. All-Star Pau ____), BAI (69D: Political writer Matt), and RONAN (71D: Farrow of MSNBC). 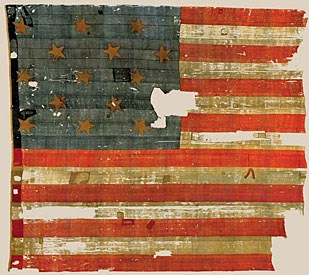 Boy, as I look this over, I find a lot of questionable material - DISCI, SMEARY, AIT, ATWT, BES, STRETTI, UTERI, TITI, PLEASER, CRO, HEMIC… but, well, it's a holiday weekend. I'm too relaxed to get all up in arms about it.

There was a lot I did like, like COLDCASH (53D: Money in hand), NEOPHYTE (4D: Greenhorn), FACTOTUM (12A: General servant), ESCAROLE (86D: Salad green)… and I enjoyed the excellent trivia learned through 103D: City whose name was the source of the word "sherry" (XERES). Sherry is an anglicization of the town name, which today is Jerez de la Frontera, in Andalusia, Spain. According to the Wikipedias, sherry was previously known as "sack," so… progress!

It wasn't perfect, but hey, neither is the country, but dammit! It was good enough!

Posted by Horace Fawley at 8:21 PM