I'm not sure where to begin, there was so much I liked about this puzzle. Let's start with the nicely executed trick - PAINT[IT]BLACK (23D: 1966 Rolling Stones hit … or an instruction to be followed four times in this puzzle. The "four times" confused me for a bit, because I saw many more "-" clues, and I wasn't quite sure what to do with them. Would both letters be assumed for each one? I guess we should have figured it out as soon as we saw 41D: Don Quixote's love (DULC[I]NEA), because we each knew it immediately, but we each talked ourselves out of it when we saw only four letters. I, at first, thought "Well, is there any way it could be 'Dulcit… something?'" and Frannie thought "Well, maybe that was just what he called her, but he was crazy… maybe her real name was something else." Anyway, it came soon enough, when we got LET[IT]SLIDE (59A: Not worry about something annoying). It's funny how the mind will work against you sometimes.

The weakest of the "hidden" answers, we thought, was SELEC[T]EES (52A: Chosen people), but I was able to GETPAST (54A: Overlook, as someone's flaws) it right away, because of the almost apologetic next Across clue. Do you think that was intentional? I like to think so.

Another thing I liked about this one was the cluing, which really seemed a notch above the usual. Tricky things, like 29A: Flight setting (STA[I]RCASE) and 31D: Remote power source, maybe (AAABATTERY), funny things like 72A: Small price to pay (CENT) and 30D: Big bang maker (TNT), clever things like 45A: Wedding feature, in two different senses (BAND) and 7D: Picked locks? (AFRO), and good ol' nostalgic things like 75A: Evil "Get Smart" organization (KAOS), 60D: Rikki-tikki-____" (TAVI), and 21D: Corn syrup brand (KARO) (at least for me… I used to put that on ice cream!). 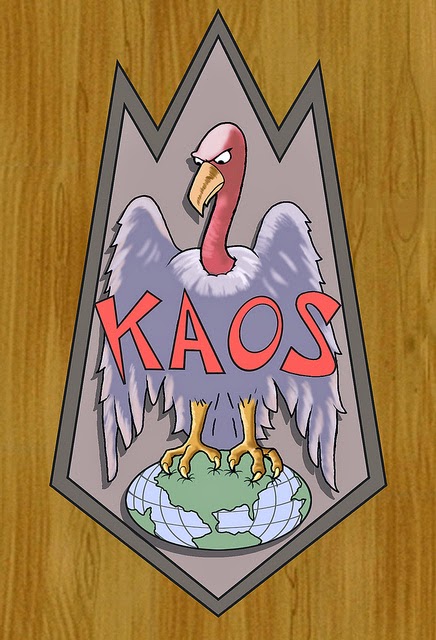 And on top of all that, you've got some nice ten-cent words like REPUTE (8D: Good or bad name), DELVES (71A: Digs deeply) and ELUDE (40A: Outwit, in a way). And I haven't even mentioned PETER[T]OSH (37D: One of the Wailers of Bob Marley and the Wailers)!

Thumbs up. I'll be watching for Mr. Phillips' name again!