We expect good things when we see Mr. Silk's byline, and today's was definitely good. Not great, perhaps, but SOLID (48D: Not iffy).

I started it late at night, and got nowhere until AMADEUS (30A: Movie with the line "I'm a vulgar man. But I assure you, my music is not") went in first. I worked down that SE corner of the grid without much resistance, but couldn't get much at all in the NW. Even when I filled in CARLSAGAN (31D: Noted 1-Across studier), I still couldn't get past wanting "universe" for 1A: It has many giants and dwarfs (COSMOS). I put that down to sleepiness. In the morning, Frannie took the iPad and finished it up very quickly.

The "preceder" clues were nice, now that I see what they are (1D: D preceder (CSHARP) and 3D: Tuesday preceder (SHROVE) (yes, "Monday" fits, but nobody actually tried that on a  Saturday, did they?). And are there roller coasters that feature a PRETZELLOOP? I love roller coasters as much as the next person, but that sounds like it might be a little much! 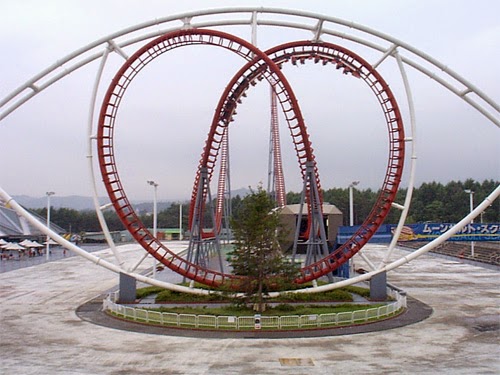 We didn't particularly like GASUP (36A: Do a 35-Across chore) being paired with CAR (35A: Hybrid, maybe), but I suppose you can imagine that the 36A clue refers only to the answer of 35A, and not to the fact that it's a hybrid. I mean, sure, you still have to GASUP a hybrid, but the whole point is that you have to do it less often… ok, I'm not going to win this one, but I just want a little more love for the hybrids. Is that so wrong?

All the long downs were very nice. OSMOSE (42D: Slip through, say) seemed a little strained, and I was a little surprised to see IUD (39D: Alternative to the pill, briefly) in there, and I have no idea what AGT (7A: Profit-sharing figure: Abbr.) stands for, but overall, as I said up top, it was SOLID.