I think I was confusing the cassava, which does, indeed, look kind of like a YAM, with a casaba melon, which looks more like a melon. Maybe a visual aid will help me to remember. 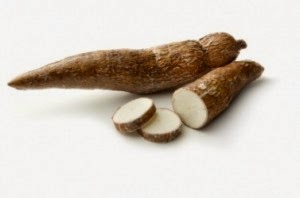 But really, I guess, I should have chosen a photo of some mixed nuts, since that's the theme. Frannie figured it out when SP[UTN]IK (26A: Startling newsmaker of 10/4/1957) crossed CH[UTN]EY (37A: Samosa topping) (mmmm.... samosa....) and the rebus was laid bare. It took her another couple, I think, before she figured out the "mixed nut" thing.

Some favorites from the fill include: ORIGAMI (61A: Artwork from a folder), PE[TUN]IA (40A: Flowery girl's name), and it's always nice to be reminded of 46A: Joe Quimby on "The Simpsons," e.g. (MAYOR).

Frannie found the near repetition of HAHAS (25D: Rib-ticklers) and HAR (55D: Laugh sound) a bit off-putting, and the same, sort of, with SUDS (23A: Brewskis) and ALE (67A: It may be blonde). Of course, the latter was mitigated by its proximity to another "blonde" clue - 40D: Blonde's secret (PEROXIDE), and there were some other nice pairings, like the TRIED / HEARD set (Presided over, as a case), and the PEN / LEG pair.

Overall, a few EHS, so not a RAVE review, but the good features OU[TNU]MBER the bad, so we won't throw it into a OPENPIT. OK. I should stop now. Time to go back to looking at all the presents...

Posted by Horace Fawley at 8:16 PM