Kind of an odd theme, of circled letters forming words that are parts of a SHOE (67A: Item depicted by this puzzle's circled letters), and also in the shape of a shoe. With a bonus piece of GUM for it to step on. I like it! Very nice, indeed. 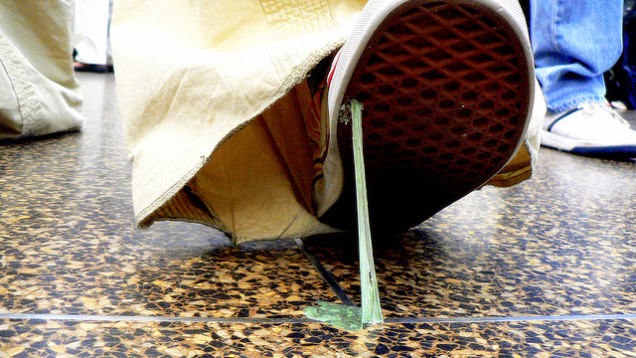 I'm sure doing this kind of thing puts restrictions on the rest of the fill, but here it doesn't seem to suffer too much. Well, ok. It suffers a little. I do not like AIRCON (47A: House cooler, for short), ODO (36A: Lead-in to meter), or EERS (35A: Plural suffix with musket), and having OSOLE (53A: "____ Mio") and RESOLE (56A: Fix, as a cobbler might) on the same row looks odd, but, obviously, it's necessary for the theme, so what are you going to do?

You know, the more I look at this, the more odd stuff I find. I've never heard of DLEAGUE (7D: N.B.A. farm system, informally), for instance, and EEN (42A: Poet's twilight) and LST (46A: D-Day craft: Abbr.) aren't all that great… I guess it all comes down to theme today. I liked it, so I'm willing to overlook a lot. Sometimes it goes that way.