Wow. Now this is a nice Friday themeless. I love all the long answers, and the fill is almost entirely excellent as well.

We'll start with those nice 11-letter and 12-letter entries. It's great to have two full names in the grid, both ROGERFEDERER and SIMONCOWELL. That last gets one of the best clues in the puzzle as well: Fox hunt leader of old. There's a hidden capital, and the "of old" makes you think further back than, say, 2010. 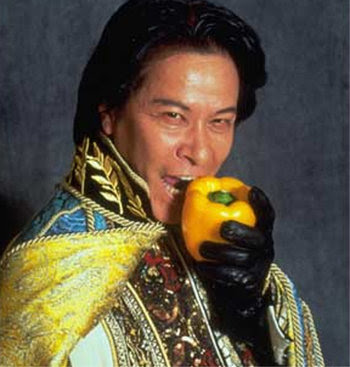 ANKLEMONITOR took me a while to figure out. I got the idea as soon as ICERINKS (17A: Checking locales - ha!) went in, but I couldn't parse the second half. STONEMASONS, ELECTRICFAN, and NOISEMAKERS round out the long answers.

But the rest is also high quality. SNAPCHAT (which my daughter uses continuously) gives a contemporary air to the puzzle from the start. GREEKGOD is an unusual word to find in the last across of the puzzle, and also allows the presence of COACHK which looks great in the grid.

I was always a big fan of the original IRONCHEF: totally over the top. Cece is into Cutthroat Kitchen, which is good fun as well, but it's clearly a descendant of the original cooking contest show. HESSIAN is a good piece of trivia (35A: Participant in the Battle of Saratoga, 1777) - they fought with the British. I am reminded of Patience: "While a lover's professions/When uttered in Hessians/Are eloquent ev'rewhere!" I suppose those Hessians are different - on researching it, apparently they are a style of military boots.

Some clues: 21A: Something well-kept? (OIL). That one took me until well after I finished to understand. It's tortured in a good way. I also like 9D: Total zoo (CHAOS) and 46A: Whole lot of nothing (VOID) as examples of straightforward but fun clues.

Didn't like HALITE or ETRADE, but they're a small price to pay. Here's hoping tomorrow keeps up the good feelings!