This played very easy for a Wednesday. I have to say, I'm pretty impressed with the density of theme in this 15 x 15 puzzle. There are 7 theme answers, with one 8-letter, two 9-letter, and four 10-letter answers. I had the theme filled in quickly, which helped my time a lot.

The theme is fun as well, in that it's the hundredth anniversary month of ORSONWELLES birth. His name was the first theme that I entered fully, only because I figured out THETHIRDMAN but before putting in the last two letters, I went to 61A. Weird the way the crosswording mind works. The only theme answer after that that I needed crosses for was TOUCHOFEVIL, and only because I needed some reference to figure out which movie was being referred to. 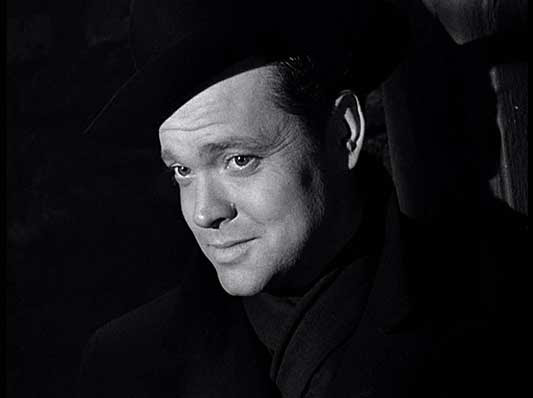 Pleasantly, though, the rest of the puzzle has some really nice parts to it. The NW and SE corners have outstanding down answers. KITTENISH is great, and OPALESCE is unusual, to say the least. I'm sure 37D: What the original Kama Sutra lacked, surprisingly (EROTICART) acted as a MOTIVATOR for our good friend Huygens.

It's true that the theme density requires a larger than usual number of 3-letter answers, especially across the middle section, where the three theme answers are adjacent, but none of them were terrible (maybe RRS), and I'm fine with them. ASTI two days running? Looks like I picked the wrong city to display yesterday.

I liked the clue for 10D: They're often seen nesting in the kitchen (PANS). Other than that, 47D: Bryophytic growths (MOSSES) gets the award for most overly erudite synonym usage.