Ugh. Let's just say that I put the wrong GOOGLEPLEX in at 27D (instead of GOOGOLPLEX) and then tried putting in GOOGLEPLus in the other one, and everything just didn't work out. I stared for some time at HAeF at 46A: Hoops division, so really I have noone to blame but myself.

I didn't like the SW corner, and not just for the above reasons. There's a whole bunch of esoterica in there, from SAXE (which was the easiest one to get) to FOSSE, SDS, NIM, TEKTITE, and RACEME. Not to mention the questionable DEMURER. And on top of that, I really really wanted to put Milwaukee in for the 1970s-'80s sitcom locale. 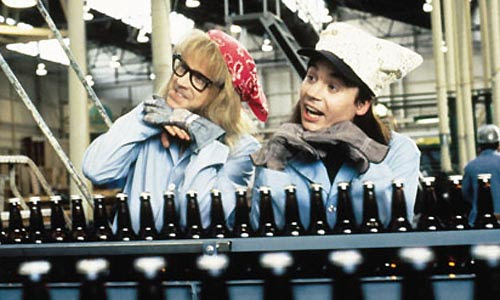 Outside of that corner, however, it's a topnotch semi-themeless. It's sad I couldn't finish, considering I knew both 1D: Where Chamorro is spoken (GUAM) and 3D: "Lulu" opera composer (BERG) without any crosses. The former is big in the Neurology world because there is an inherited form of ALS-Parkinsonism-frontotemporal dementia endemic to the Chamorro population. More than you ever wanted to know, I'm sure.

25A: Series of unknown challenges? (ALGEBRAEXAM) is outstanding. I also liked ROOMIES. 51A: Exhibitionists? (CURATORS) is fun as well. 40A: Drawing people (DUELERS) took me forever to see. MAKETRACKS and ROYORBISON are great entries.

I had a hard time getting NEARESTEXIT, which doesn't exactly feel like an "Evacuation location." ALLORNONE is fine, but leaves me a little cold.

Best clue for a 3-letter answer: 16D: Acronym associated with retirement? (REM). That's making the best of a necessary evil. 59A: Jointly attacked? (KNEED) is pretty fun too.