This went pretty smoothly, over all, so I was surprised when I got the error message. Turns out I'd put SoP in at 19A: One easily duped (SAP) and didn't check the crossing closely because it was in Spanish, which I don't know. Anyways...

The theme is okay: take a well known television show title (and all four are essentially contemporary, although Mad Men finished this year), and interpret it literally. Thus Mad Men becomes PSYCHOPATHS and House of Cards HALLMARKSTORE. These two are fine. I think I like Game of Thrones being MUSICALCHAIRS the best. The Walking Dead being PALLBEARERS is off. It is true that they carry the dead while walking, but it's not quite right.

By far my favorite clue-pair answer was 31D: "All but one" win, in bridge (SMALLSLAM). I keep on trying to get Horace and Frances interested in bridge. It's the best card game there is out there. And it has such a bum rap as an "old people's" game. 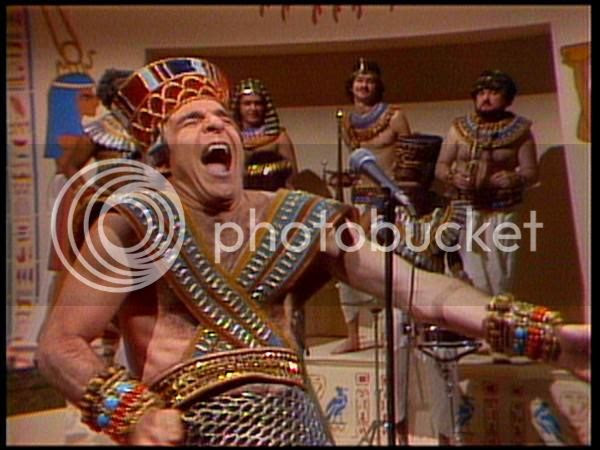 1A: Paris pyramid designer (IMPEI) is becoming a standard entry, but because of the topicality and the complete name (or at least complete as he usually went by), I'll give it a B-.

Don't like SINUS or it's clue (Stuffy site?). 18A: Grp. on the range? (NRA) isn't really clever enough to merit a question mark.

On the other hand, I was amused by KIRK crossing AMUCK, if only for the classic Trek episode "Amok Time". 3D: Disappearing conveniences (PAYPHONES) is so true. They're just not around anymore. I am reminded of the scene in Airplane! when all the reporters run into the payphones at the same time and the whole bank falls over. Good times.

Anyway, a ton of glue, and not much more. Didn't love it.