Oh, come on. You didn't really think I was going to finish Saturday faster than Friday, did you?

What a great themeless today! The grid has a sort of pinwheel feeling to it, with the central wheel and the four corners spiraling off. I like very much, thank you, that each corner has a three-space wide entry into it. It gives each section a chance to break back into it if you can't get traction from inside the isolated area.

Speaking of which, nothing worked on my first look into the NW. I had OENO at 5D, that timeless piece of crosswordese I learned from struggling through Maleska era puzzles. None of the acrosses worked, and I kept wanting to put in motifS at 4D (TROPES). Even guessing 7D: It's superior to Superior (ONTARIO) didn't help much.

I got much better traction in the NE. 10D: Come-on comeuppance (SLAP) was straightforward, as was 21A: Exercise position that strengthens the abs (PLANK). I've been doing a few of those recently myself. I love ATTAGIRL, but 13D: Wryly amusing (IRONICAL) is one syllable too long, isn't it? DESKSETS is a very STAID third element in this stack of 8-letter answers.

36A: Breaks one's word? (SPELLS) is cute in its literalness. I also like 27A: Something paid by a hypocrite (LIPSERVICE). I was able to break the NW off of these entries, supported by 9D: Unsupported? (BRALESS) - see what I did there? This stack is the best of the puzzle. 1A: Drop-in shot? (PHOTOBOMB) gets an A+ and is my favorite clue-answer pair, all at the same time, both for the great clue and the contemporary answer. ROBREINER is great for the throwback references to All In The Family, as well as the complete name. And OOLONGTEA. Excellent. 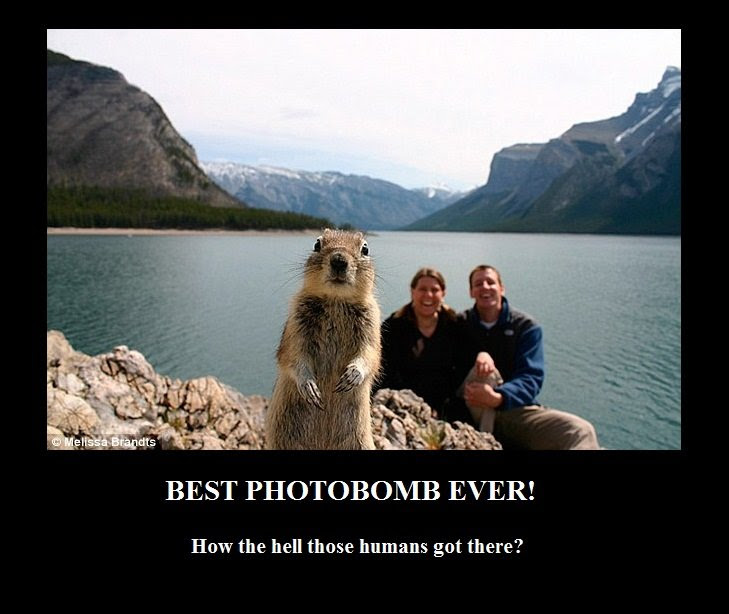 Funny that 24D: You can't focus when this is on (LENSCAP) echoes yesterday's "lens cover" clue and answer. It's more the standard term, I imagine as well.

I had ISSUES getting into both the SW and SE. Even after putting in DECLARE and FIRM, and then getting RENERUSSO (nice echo from the NW, with a full name with the initials R.R.). I never saw the film version of Rocky & Bullwinkle. Strangely though, it wasn't that long ago I put the cartoon version of Boris and Natasha on this very blog. It wasn't until my brain gave up Julie TAYMOR that I was able to finish the SE corner. Nice that the TUBA gets a nod.

I don't know who Bobby TROUP is, and I doubt I'll remember his name in future puzzles either. I wanted M*A*S*H at 51D, despite the clear evidence that the answer would start and end with S. I never saw S*P*Y*S. Odd that they did that with two movies. The former came out in 1970, not 1974. I don't know exactly why 33D: Had a chilling effect? (SHIVERED) has a question mark. It seems to me that the answer is a direct response to the clue.