Anchored by the musical duo of BIGGIESMALLS and METALHEAD at the bottom, and the amusing "spoken word" pair of NOMEANSNO and INEEDAMOMENT up top, this themeless was fun all the way through. 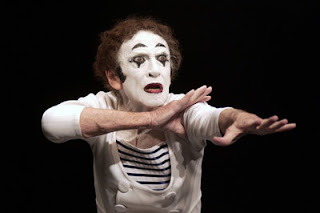 I was fooled early on by "14A: Waterway whose construction began in Rome." I should definitely have known better on a Friday, but I still couldn't help counting out "aqueduct" to see if it would fit. Not that there was any one that was famously called "aqueduct" or anything, but, well... what can I say. I was further confused for a while by my incorrect "ArM" answer to 3D: Quarterback's asset (AIM), but finally, ERIECANAL became clear. Nice! I also loved JIFF for "5A: Flash," and FLOATS (8D: They might be wished for at fountains), although the latter did not fool me as much as the Rome clue did.

Love the politics in 25D: Nationalism, per Einstein (DISEASE) and the gender issue awareness in MALEGAZE (35D: Topic in feminist film criticism). And damn if I wasn't taken in yet again by 46D: Lawful ends? (ELLS). See, "lawful" starts and ends with an L. Egad. When. Will. I. Ever. Learn?

1A: Many consultants, for short (MBAS). D. But the puzzle as a whole overcame this weak start.
Favorite: 53D: They're game (ELK). I just love this kind of misdirection, and it's even better here because the collective noun has no S ending.
Least: Nothing. There were some answers that I just did not know, like ZAYN, GALOP, and NAENAE, but these are not puzzle problems, they're Horace problems. Sure, I could pick on RAS, or REMS - ok, I don't like that plural - but I'm not going to today, because this was a really good Friday puzzle.