I was happy to get get one more of these celebrity puzzles before my month was up, and what a fun one it was! Isaac Mizrahi is a fashion designer, and he and Mr. Kahn have worked several common phrases into the puzzle and re-clued them so that they become design-related. The first one I came to was "3D: Preferred means of arriving at a fashion show?" and even though the word "fashion" was in the clue, I still put in "fashionably late," which fit (!) but which was also wrong. I thought my guess was good (the doubling of fashion aside), but the real answer, TAXITOTHERUNWAY, is much better. 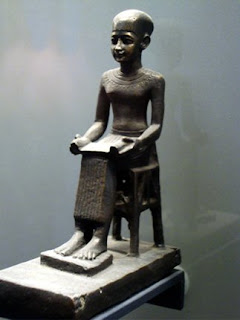 They're all quite good, but I especially like CUTANDDRIED (77A: Like a model's hairstyle), because it's so apt, and WORKTHENIGHTSHIFT (24A: Flaunt a loose dress at a soiree?) and TAKEUPACOLLECTION (109A: Shorten some couture dresses?), because they're so amusing.

1A: Little bit (JOT) - B.
Favorite: 40A: Support under a tank? (BRA) - I liked how many of the non-theme clues seemed to be tailored (*wink) to the overall idea.
Least: 104A: More limited (LESS) With so many clever clues, this stands out as a clunker. But then again, maybe I'm missing something...

All in all, I very much enjoyed this one. I hope you did too!