For a minute or two I thought we had, today, that rarest of crosswords - a Monday themeless. But no, I have discovered that the mirror symmetry (and the evil grinning face of black squares?) accompany a theme of phrases that start and end with the same letters. So we have INITTOWINIT (6D: Competing with the goal of victory) whose clue I misread to mean "in competition with the idea of victory being the goal," EVELKNIEVEL (7D: Daredevil in the Motorcycle Hall of Fame) which begs the question: "Motorcycle Hall of Fame?," OODLESOFNOODLES (28A: Ramen product) which I used to enjoy occasionally, but which now elicits more of a "that's probably really high in sodium" response from me, and finally, ABBYCADABBY (56A: "Sesame Street" Muppet with wings and a magic wand) which I had never heard of before, but which is now Frannie's new nickname. 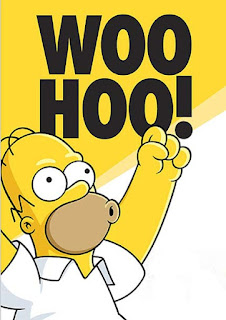 Weird theme, but I kind of like it for its very weirdness. Another weird thing I didn't like quite so much, however, was SLABBING (45D: Applying thickly, with "on").

1A: Green condiment served with sushi (WASABI) - B+. Mmmm... wasabi....
Favorite: 12D: Opposite of a life coach? (HEARSE) Too soon! :)
Least: ENDASH (7A: Hyphen's longer cousin). I had EmDASH in there for a long time, because I think of the ENDASH and the hyphen as being identical. Anyone have any good authoritative information on the relative length of various punctuation marks?

But really, ENDASH on its own is a fine entry. I would certainly DEEM it superior to OHO, which I have never heard anyone (except, possibly, constructor Bruce Haight) say in real life. (And I half think he might only use it to justify his use of it in grids...)

Anywho, it was a fine Monday. Somewhat more challenging for me than some, and that's always a good thing. Plus, the unusual theme... let's give it a thumbs up.