Just like she used to do on the show with the Carson who was known for his monologues, Elayne Boosler makes me laugh. I got the first theme answer (UBERDRIVER (18A: Modern-day remake of a Robert De Niro film?)) pretty quickly, and smiled. It's a clever trick. I'd never heard of "The Bank Dick," but HOLIDAYAIRBNB (46A: Modern-day remake of a Bing Crosby film?) is a classic! And finishing it up with GMOPOPCORN also got a little chuckle. 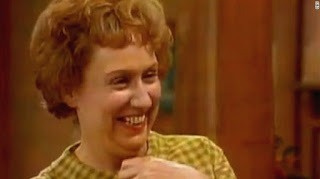 Unsurprisingly, the fill had a decent amount of humorous material, too. 65A: Guy with a lot of bookings? (DANNO) is hilarous - at least to this middle-aged man. Did they keep all the old names on the new show, I wonder? And does McGarrett still say "Book him, Danno?" Anyway... 67A: Make litterproof? (SPAY) was brilliant. And I'm super sad that my error came in RUBIN (15A: Apply, as lotion) (I had "rub on") because FIREPLUG (8D: What may have a dog leg to the left or right?) was also brilliant. I dropped in "golf hole" pretty confidently after putting in "rub on," and even while all the other letters were slowly changed (starting with the first theme answer) I never went back and found that O until after I got the sad message, and then it took me several minutes. O well...

Still, I very much enjoyed this puzzle. The cluing was very good and the theme was fun. And there's some great trivia in 56A: F.D.R., Churchill and Stalin's last meeting place (YALTA), 69A: Animals that provided hair used in Chewbacca's costume (YAKS), and 54A: Word derived from the name of a Belgian town (SPA). And here's another bit of trivia about that - there's a bottled sparkling water named "SPA" that we bought in the Netherlands, and I'm guessing that Belgian town is also its source.

You learn something new every day. (Yesterday, for example, I learned that the "lally column" was named for John Lally, who invented it. And he lived in Waltham, MA!) And when you can start the day with a good laugh, too, well, that's even better. Ms. Boosler, you still SLAY.