WOO-HOO! It's Thursday, a day on which we have come to expect the unexpected. Even so, when I got to 30-Across and found a two-letter word, I was momentarily shocked, and may even have said to myself, "NO, NO!" But as soon as I had, I suddenly realized exactly what was going on, and quickly filled in "SKINOFFMYnose." That expression, for whatever reason, is more familiar to me than what they wanted - SKINOFFMYBACK (24A: Result of some sunburn I had?). 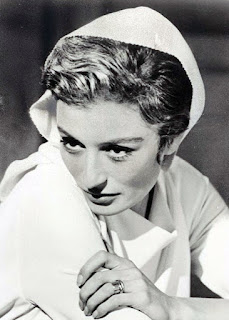 The John Donne pun at 44-Across - MANISANISLAND (44A: Declaration concerning British geography?) was my favorite, and honestly, quite a LAUGHINGMATTER!

It wasn't my FINESTHOUR, though. I didn't ACEIT by finishing SANS errors. At "16A: Approach in handling something" I entered TACt, which I still think could work just fine, but StATE, while it is a word, is not the word clued by "13D: Variety of ray" (SKATE). TACK. Hmph.

Tough clue for RENO today (14A: ____ Sweeney, leading character in "Anything Goes"), and SAC is always kind of a gross entry, made moreso when clued with "Egg ____." But TYPO got a great clue - "An aye for an eye, say?" - and "Home to Castro" fooled me! I had the C to start it and just dropped in CubA. It took me quite a while before I corrected it to CASA. The Ray/Wray (KROC/FAY) clues were cute, and that jokey clue about finding Jesus on a ROOD was pretty daring!

Overall, the theme amused me, and there were several clue/answers (especially in the Downs) that I found interesting or funny. Let's call it a good start to the Turn.