Four perfectly common phrases, and again, a surprising theme. Who does this? Who sees this kind of pattern? Crossword constructors, that's who. 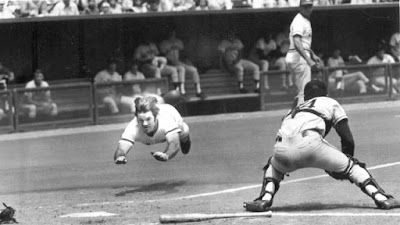 So the theme is fun, new, and well done. And there's even a little bonus material, maybe, with MOONS (Jupiter's Ganymede and Europa). No? AWMAN!

Nobody's favorite variant TEHEE makes another prominent appearance today, and ABLER is slightly UGG-worthy, but that's just two small things. On the other hand there's MALAISE (Lethargy) (I think of it more as an illness than just plain lethargy, but still I like the word), FANTASY (Genre for the Harry Potter books), and FUTURE (Its time has not yet come), which gets a nice clue.

I had at least three missteps today - WENTsolo for WENTSTAG, Run for RBI, and Atwork for ACTIVE (Not idle). It was the last one that never got fully corrected before the puzzle was filled in. Sure, AtTIVE and tEDE were noticed immediately, and might have been caught before I handed in my paper at a tournament, but in this digital realm, I have to still count it as a "Finished With One Error." :(

My personal misfortune notwithstanding, this was another solid puzzle.