Wow, what a strange theme. 14-Down, CROSSDRESSING crosses five different types of salad dressing: House, Caesar, Ranch, Russian, and Italian. Impressive and crazy, and very appropriate that it should run today, as we're right in the middle of Eurovision 2019! Frannie and I jumped through several internet hoops to watch the first semi-final last night, and we'll do it all again tomorrow for the second semi, and then Saturday for the Grand Finale! ... but I very much doubt that was on anyone's mind who had anything to do with creating or running this puzzle... 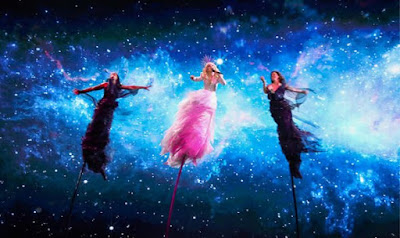 I just noticed that the long central theme doesn't really cross any words other than the dressings except at the first or last letter, which is a nice detail. They sure like to be strict about themes at the NYTX, and I doubt that was unintentional.

In the South, I liked IODINE (First-aid antiseptic) because it brought me back to my youth, when Mom would dab that orange liquid onto whatever scrape or sliver-produced cut I happened to get. The stinging meant that it was working! Do people still use IODINE for that? Why don't I have any in my own medicine cabinet? ... maybe I'll look for it the next time I'm at CVS.

EVILER (More malevolent) was weak, despite the nicely alliterative clue, and JOVI looks a little forelorn there without at least the Bon. That would have made it more good. Get it? Bon is French for "good." ... oh nevermind!

Having done my share of CROSSDRESSING back at college, I liked the theme just fine, and the fill had enough good answers (CONJOIN, SASHIMI, SKYDOME (that was renamed?!) among the other already named) and fun clues (like "Avoided elimination in musical chairs" (SAT)) to make me look the other way when I had to.