I don't know much about STELMOSFIRE, but I looked into it, and it can supposedly look something like this: 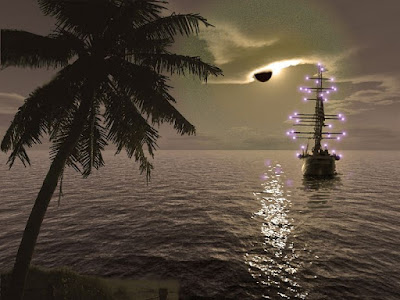 I guess that the "double lights" in the clue for 72D - "Weather phenomenon whose double lights were said to represent this puzzle's subjects" must be referring to the light on either side of the cross beams on a ship like this. And I suppose that's why they went with the horizontal symmetry in the puzzle - if you don't look too carefully, you can imagine the circles as appearing in similar formation to the lights in the photo.

I enjoy the rule-bending move of including six duplicate words in the grid without having to actually clue any of them, thanks to the "double take" of removing a letter from each. Thus, the two BOXERS become "boxes" and "Boers," and PROTEAM becomes "pro tem" and "P. R. team." And the circled letters spell the twins "Castor" and "Pollux" (THEGEMINI) (Also another name for the STELMOSFIRE phenomenon). It's all so complex!

Interesting trivia in "Political figure on whom Snowball is based in 'Animal Farm'" (TROTSKY) (Harvard is currently in the process of digitizing many of TROTSKY's papers), and I enjoyed the clue "The Jets, but not the Giants" for GANG. "Cleaning up the mess, for short," was tricky for ONKP, and "Keeper of the books?" (SHELF) and "One who fixes flats?" (TUNER) were a fun side-by-side pair. But I thought "Hitting close to home?" wasn't quite right for [S]TRIPLING. I mean... I guess that by getting to third the batter is figuratively closer to home, but the hit itself presumably went quite a ways away from the plate... oh I don't know... it just seemed kind of convoluted.

Overall, though, I really liked this one. The theme is much more dense than I thought it was at first glance, and the more I think about it, the more I like it.

Welp, that's it for another week. Frannie's back tomorrow, and I'll see you again in 2020. Until then, Happy Holidays and Happy New Year!