Today's pugilistic theme is softened with punny humor. All in one big brawl we've got the jazz musician who CAMEOUTSWINGING, the hairstylist who BOBBEDANDWEAVED, and best of all, the king and queen who stayed out of the fray and instead PUTUPTHEIRDUKES. They're all good, but that last one is really quite clever. Nice work.

Again today the theme answers span the entire grid, which is nice, and there are four nine-letter answers running vertically through them. A NACHOCHIP is always welcome, but the opposite is true of POISONIVY. The "Leaves of three, let it be" warning is well-known, but it probably leads people to avoid all kinds of plants they don't need to worry about. Clover, for instance. :) 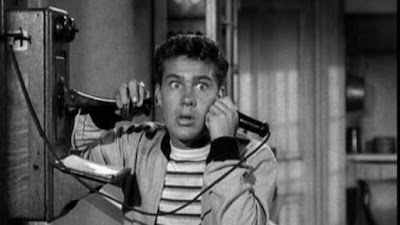 The biggest offender today is ACNED (Benefiting from benzoyl peroxide, say). Even though the answer went right in for me (I once had a prescription), the construction is one that I have never heard. Perhaps it's the more politically correct way of saying "pimply" these days, I don't know... And another thing I don't like is ARTSY clued with "Pretentious." I know it's supported by dictionaries, and you find it clued that way a lot, but as an artist - or, at least as someone who enjoys both creating things and looking at things other people have created - I am offended. There, I said it. But you know us ACNED, ARTSY types, always so fragile. Nevermind me. Just continue with your bullying. We don't mind being DOWNGRADEd.

Fun pairing of APSE and NOOK tucked away in the recess of the NE, and MUMBO Jumbo was amusing. AMAIN (At full speed) took me a few crosses, as did ABREASTOF (Informed about), but I enjoyed the oddity of both, and I love how the clue for the latter mirrors the "ending with a preposition" structure.

Overall, I'd say the humor wins out today over a few little pet peeves and bits of crosswordese (URI, NEE, EKG). I'd be quite happy with myself if I had come up with such a clever theme.